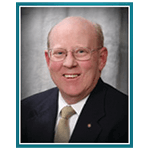 John Caton practices principally in the firm's Hutchinson office. John was born in 1946 and, accordingly, is a Baby Boomer of the first rank. He graduated from high school in 1964 and, for a period of years, juggled classes at Kansas State University in an ultimately futile effort to preserve a Selective Service academic deferment.

After a stint of military service, John returned to Kansas State and completed his undergraduate degree. He accepted an offer from a Des Moines insurance company and soon found himself to be, of all things, a group pension administrator. Pension administration proved to be a particularly uninspired career choice and John soon began a search for other options. An assortment of assessments suggested he might have some aptitude for law and, seizing upon a glimmer of possibility, John enrolled as a first year student at Washburn University Law School in 1970.

He discovered to his genuine surprise that he seemed to have as flair for the peculiar art of taking law school essay examinations. John enjoyed some modest academic success and, in time, earned an opportunity to join the law review staff. He applied himself with diligence to using the proper footnote forms and shorthand signals of authority promulgated by earlier generations of the Harvard Law Review staff and compiled in the heralded Blue Book. His commitment to the truly persnickety eventually gained him the title of Editor-in-Chief.

In due course, John graduated from Washburn and joined a law firm in Wichita. He was assigned a variety of duties others didn't want to handle and eventually was incorporated by default in the firm's litigation practice. As a litigator he was immersed in discovery but litigated rarely. In time, John and his partners concluded that he was temperamentally ill-suited for litigation but that he might be of use in the firm's municipal bond and public finance practice.

The years 1977 to 1986 proved to be a great time to be a budding Bond Lawyer and John became a made-member of the firm's Bond Department. The obligations of the states and their political subdivisions were largely exempt from federal and state securities laws and regulations and state and local government officials quickly discovered that public funds could be employed admirably to finance all sorts of public and private development efforts from vast urban renewal projects to the renovation of the local chicken house restaurant.

But all good things end and, in time, with accumulating layers of niggling regulation, the public finance practice began to lose some of its allure. John, now well past middle age and maturing rapidly, began a search for new horizons. Being relatively near-sighted, he returned to Hutchinson in the mid-1990s and settled in.

John strives to be involved in community activities and affairs. Currently, he serves as Chairman of the Hutchinson/Reno County Chamber of Commerce Public Policy Committee and is a member and past President of the Hutchinson Rotary Club.  John yearns to belong to the Young Professionals of Reno County, but is resigned to the fact that some things just are not meant to be.

When he is not practicing to be a better lawyer or engaged in community activities, John mows grass and maintains various pieces of equipment useful for mowing grass, both short and tall. He and his wife, Mary, live in suburban Buhler on a tract of land that is too big to make much sense as a home and too small and wooded to be a viable farm. Their children, five in number, have moved on and away to live their own lives in their own ways.

Thank you for contacting Martindell Swearer Shaffer Ridenour LLP. We will get back to you shortly.

Please complete all required fields below.