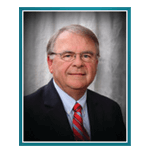 Jerry L. Ricksecker grew up in Reno County, Kansas, on the family farm which was located west of Hutchinson, Kansas. Jerry attended the Partridge Public Schools and graduated from Hutchinson Community College. He graduated from the University of Kansas in 1967 and was a junior high school teacher in Topeka, Kansas, for one year following graduation. He served in the United States Army (artillery) in Vietnam in 1969-1970. Upon his return from Vietnam, Jerry attended Washburn University School of Law and graduated in 1972 with a Juris Doctor degree. He joined the Martindell firm after law school graduation and has practiced law in Hutchinson since 1973.

Jerry has been active in the community serving in leadership roles for numerous non-profit and civic organizations, such as Emergency Shelter Home, Red Cross, Hutchinson/Reno County Chamber of Commerce Ambassadors, to name a few. For the past number of years, however, Jerry has concentrated his volunteer efforts by being actively involved with the American Legion Basketball Tournament Committee which hosts the National Junior College Athletic Association Division I Men's Basketball Championship held in Hutchinson in March each year. He has served as Team Host, Assistant Tournament Chairman, and since 2003, has been the Tournament Chairman.

Jerry has two children, a son who practices law in Washington D.C. and a daughter who resides in Hays, Kansas. He has three grandchildren.

Thank you for contacting Martindell Swearer Shaffer Ridenour LLP. We will get back to you shortly.

Please complete all required fields below.